The INTER-NOISE 2016 Satellites took place in Berlin on August 25-26 at the DIN Deutsches Institut für Normung e.V in the frame of the “Towards a Quieter Future” 45th International Congress and Exposition on Noise Control Engineering (INTER-NOISE 2016) organized in Hamburg on August 21-24 by the German Acoustical Society in cooperation with Hamburg University of Technology. The main congress theme “Towards a Quieter Future” reflects the urgency of reducing urban noise pollution which has increasingly become one of the factors that heavily affect health, quality of life and well being, along with air and water pollution as reported in (WHO, 2011) and (EEA, 2014).

In Berlin, three different symposia on Building Acoustics, European Noise Policy, and Soundscape and Psychoacoustics were organized in cooperation with the Technical University of Berlin as well as the Acoustics, Noise Control, and Vibration Engineering Standards Committees of DIN and VDI.

On August 25, I attended the symposium on European Noise Policy chaired by Regina Heinecke-Schmitt and Bernd Lehming attracted by the program which promised to give a taste of the state of the art of noise action plans successfully implemented in Germany, with a special focus on the case of Berlin through:
– a key-note lecture on Examples of successful implementation of noise action plans in German cities by Antje Janssen, manager and shareholder of the LK Argus Kassel GmbH;
– an excursion to real life examples of Berlin’s noise action plan led by Maike Diechmann along with Joerg Kaptain of the Berlin Senate Department for Urban Development and the Environment.

For those who are not familiar with EU noise policy, noise management action plans – usually known as noise action plans – were introduced in 2002 by the Environmental Noise Directive (END 2002/49/EC) as a measure to prevent and reduce environmental noise and preserve environmental noise quality. Member States are required to prepare and publish, every 5 years, noise management action plans along with noise maps for: agglomerations with more than 100,000 inhabitants, major roads (more than 3 million vehicles a year), major railways (more than 30.000 trains a year), major airports (more than 50.000 movements a year, including small aircrafts and helicopters).

The key-note lecture aimed to present the results of the Noise Balance 2015 project which reported on the status of noise action plans implemented in Germany up to Jan, 1 2015 even if noise pollution has not yet considered as a political priority today – unfortunately I would add. The presentation illustrated successful noise action plans according to the main measures adopted to reduce noise pollution such as: noise barriers, speed reduction, noise reduced asphalt. integrated approaches (urban and transport planning), and public participation.
The latter one was applied by the city of Bielefeld which set up a specific website where citizens’ feedback were collected through on-line consultation. Then a feasibility project of the public proposals was developed in 4 steps. In the first one, the proposals were selected according to the relevance to the topics of the END; in the second one, the legal feasibility and the potential impact of the recommended measures were verified; then the practical feasibility was checked; lastly, workshops were organized with the urban planning and transport departments to define the list of recommended measures to be developed through the noise action plans.
The presentation concluded pointing out possible criteria of a successful implementation of the noise action plans such as:
– Less noise exposure achieved by the implementation of the noise action plans;
– Higher allowance of the needs for noise reduction in urban and transport planning (strategic approach)
– Raising the awareness od the need for noise reduction in the society( politics, citizenship)

With these best practices in mind, we left the venue of the symposium to venture in the excursion to real life examples of Berlin’s noise action plan led by Maike Diechmann along with Joerg Kaptain of the Berlin Senate Department for Urban Development and the Environment. A private bus brought us around the city to visit 5 pilot studies of the 2002-2007 Berlin Noise Reduction Plan chosen according to the kind of measures applied to reduce noise pollution. It’s interesting to note that this plan was named Noise Reduction Plan to avoid misunderstandings by the citizens who initially reacted against the definition of Noise Action Plan and clarifying that the main aim of the plan was to contrast and reduce noise pollution.
Then, the first comprehensive Noise Action Plan was released by the city of Berlin in 2008; it was updated in 2013 and then resolved in 2015.

On the left, markers on the map indicate the location of the pilot projects (Map courtesy of Berlin Senate). On the right, maps are given to participants to the excursion (cc) Antonella Radicchi. 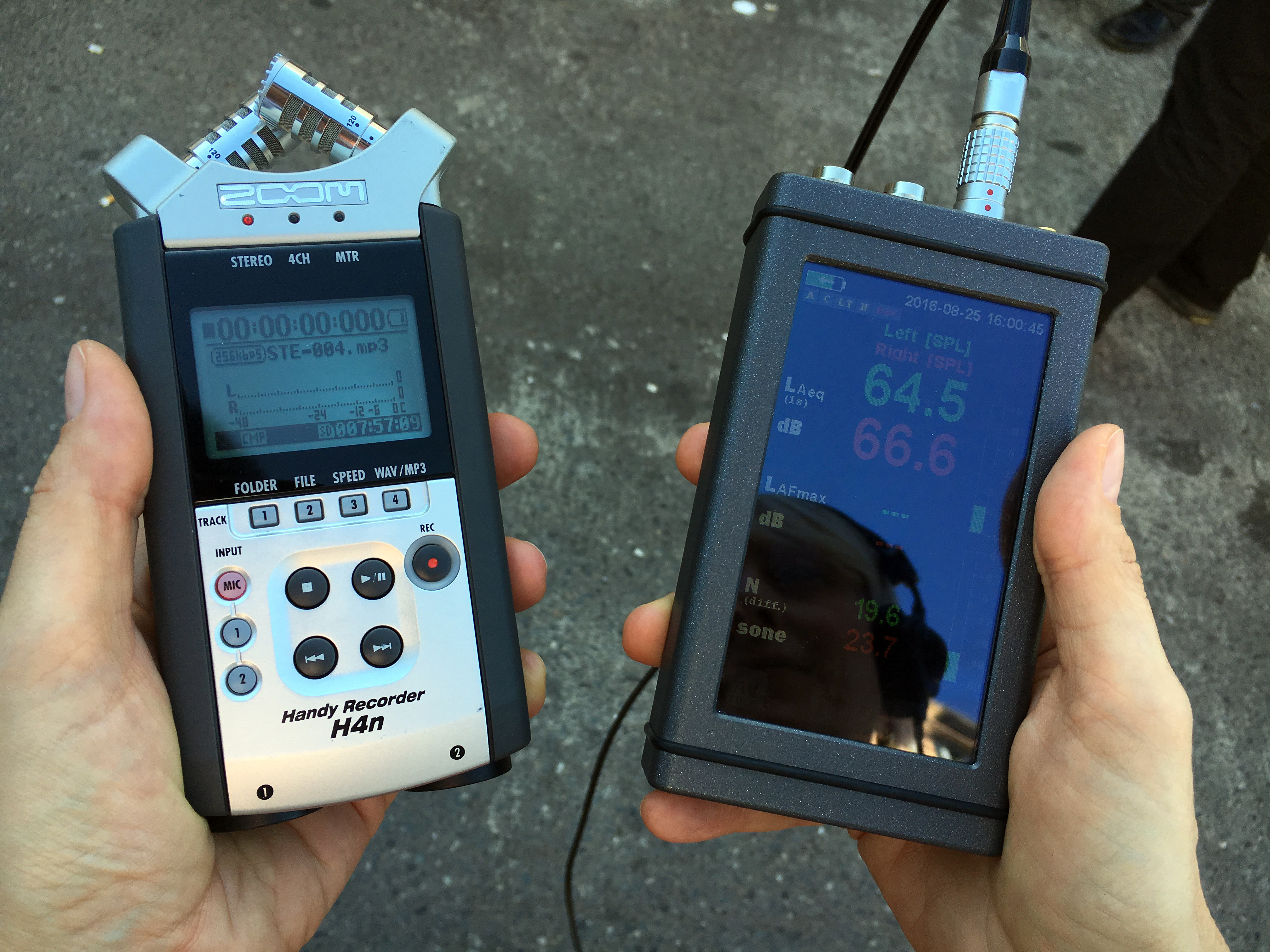 This is me recording audios and measuring noise levels! (c) David Li.

The first example we visited was Brandenburgische Straße (between Hohenzollerndamm and Berliner Straße). The state of the public street was evaluated in course of the compilation of the noise action plan in 2008 and several measures adopted to reduce noise pollution caused by an average daily traffic of 22.000 units. Indeed, even if since 1999 the speed limit had been 30 km/h, in 2008 the street presented an average of 74 dB (A) at daytime and 68 dB (A) at nighttime; moreover the conditions for cyclists were inadequate and there was a negative impact on the houses lining the street.The street was redesigned and turned into one wide lane for vehicles plus a lane for cyclists. New road markings and crossing aids were also installed. In 2014 the average daily traffic load was about of 20.000 units. Due to the overall changes, a noise reduction of 1,5 dB (A) was calculated.

Brandenburgische Straße before and after the intervention.

Then we visited the pilot project “Maaßenstraße” which is a very interesting and pioneering example of noise action plan combining public participation and the right to public life, as Jan Gehl would argue. Indeed, the street and its public spaces were redeveloped according to the Swiss version of the “shared space” concept, which first were adopted in the Netherlands in small Dutch towns’ street design projects. The application of the “shared space” concept usually implies the turning of a busy traffic street into a public place where traffic signs, traffic lights, traffic islands, road markings and sidewalks are totally replaced by a common space equipped with urban street furniture favoring therefore social interaction and accessibility to people with a restricted mobility. However the development of this concept may imply also side effects such as missing guidance for visually impaired people, missing possibility to assess the traffic situation for seniors and children and the outsourcing of parking areas.
In order to deal with the potential side effects, in Switzerland a slightly different concept was developed which came out being more suitable for big cities like Berlin: a busy traffic street is redesigned and turned into a public space where access to motor vehicles is guaranteed with a restricted speed limit of 20 km/h. Parking lots are also provided and sidewalks maintained for safety reasons especially for seniors and children.
In Berlin, the redevelopment of Maaßenstraße implied also public participation via working groups, flyers, post cards and e-participation. According to the suggestions made by citizens, the following measures were adopted in the redevelopment of the street: the protection of the genius loci, a traffic reduction, the creation of new non-commercial public paces equipped with benches, a redesign of the crossings for people with a restricted mobility and for those who are visually impaired were needed, the provision of a new cycling lane.
Here you can find more info and have a look at the pictures before and after the redevelopment of the street. 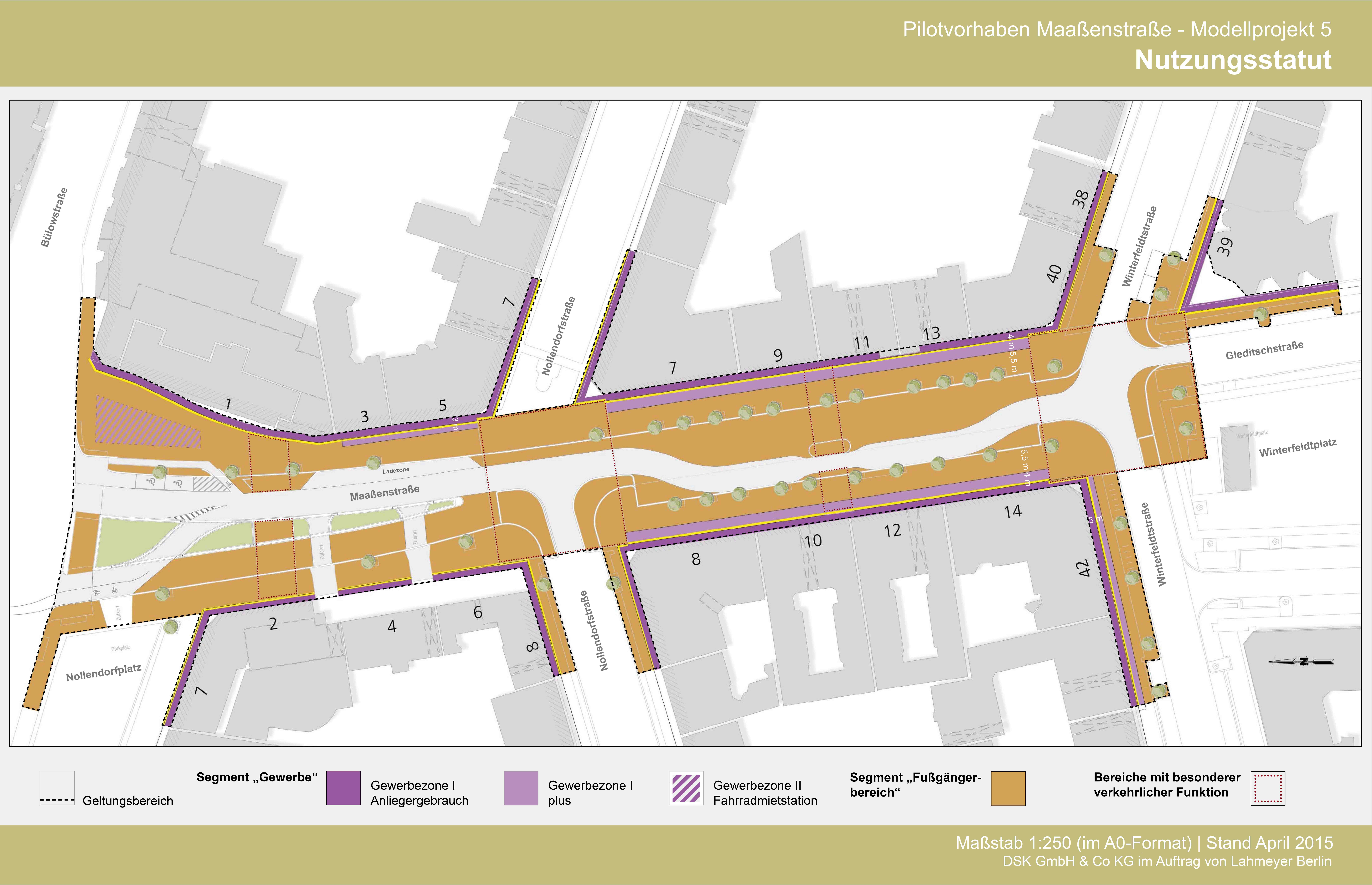 The third example of noise action plan we visited was at Katzbachstraße where the “Tempo 30” criterion was applied to reduce noise pollution. Berlin tested the suitability of speed limit of 30 km/h for the main traffic network composed of 3.167 km: as of 2015, 17% of the main traffic network were speed restricted to 30 km/h and 5% of it has a 30 km/h speed limit at night.
The effects of the reduction from 50 to 30 km/h were analyzed in 2013 and the outcomes were successful: the application of the “Tempo 30” measure caused a speed reduction up to 16 km/h and up to 18 km/h with police controls.
In the case of Katzbachstraße, since 1990 speed limit had been already reduced to 30 km/h at night because of complaints made by citizens. However, noise pollution was not significantly reduced and further complaints by local residents followed up until 2009 when speed limit to 30 km/h was imposed full-time by the traffic management of Berlin (VLB) not only to reduce noise pollution but also to abate high costs resulting from the numerous traffic accidents between Monumentenstraße and Dudenstraße. 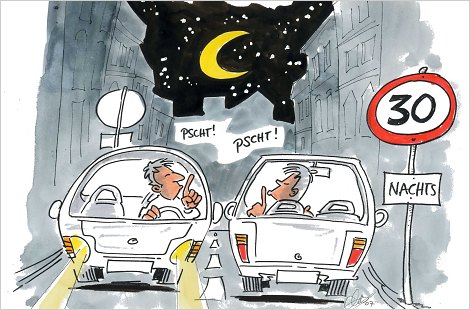 The fourth stop of the excursion was at Großbeerenstraße (in between Yorckstrasse and Hagelbergerstrasse). Here the noise action plan was based on asphalt substitution: almost 200m of rubber modified DSH-V asphalt was laid out in Großbeerenstraße.
The DSH-V is a thin asphalt layer, which is laid out when it is still hot. It has a high density and a binder with a rubber modification increases the flexibility and the durability. Between 45 and 65 km/h a noise reduction of 3 dB (A) is guaranteed. In order to maximize its performance, specific measures are to be followed for the installation: the base layer has to be stable and clean and the mixture of the binder should have the right mixing ratio. Weather conditions are also relevant in the process of installation. Großbeerenstraße presents some cracks in the surface because the ground temperature was too low due to the bad weather conditions we had when the asphalt was installed. 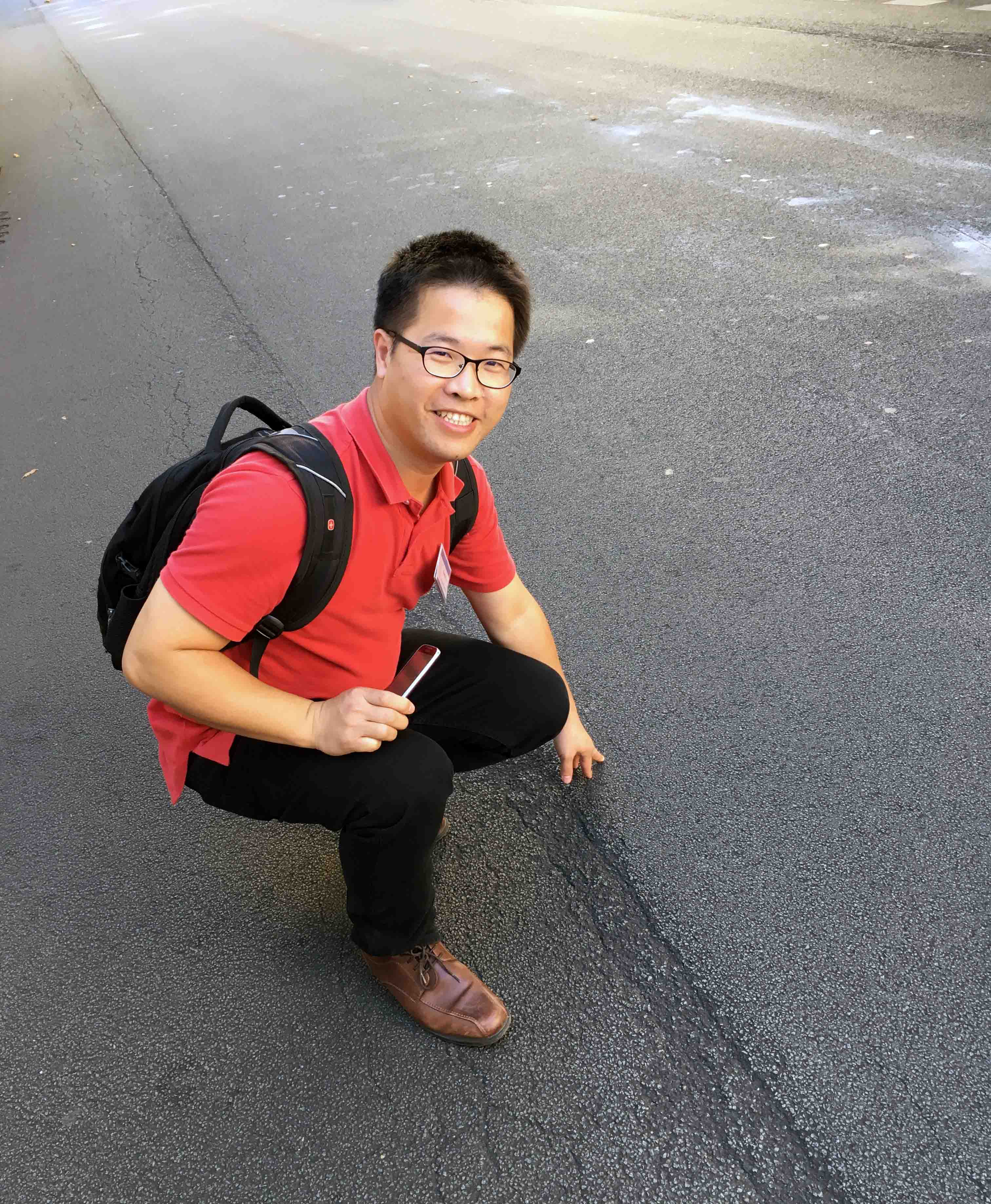 We ended the excursion visiting the Riehmers Hofgarten in Kreuzberg which represents an exception to the urban expansion general plan developed in 1858 in Berlin by James Hobrecht characterized by a wide street grid with huge compact blocks (400x200m) with private courtyards.
Indeed, Riehmers Hofgarten was planned by Master Mason Riehmer according to the t-shaped design concept, which implied the construction of a private street and a huge and beautiful garden courtyard. The facade constructions have expensive neo-baroque and renaissance elements: particularly the facades lining Großbeerenstraße and the two atlases, which carry the balcony above the courtyard entrance in Yorckstraße. The Hofgarten was renovated in the 70s and 80s and nowadays is a popular place to live with offices, medical practices, restaurants and cinemas.
The Riehmers Hofgarten is a very good example of noise reduction plan where urban design principles are applied to guarantee quietness and recovering from the noise streets surrounding the Hofgarten. 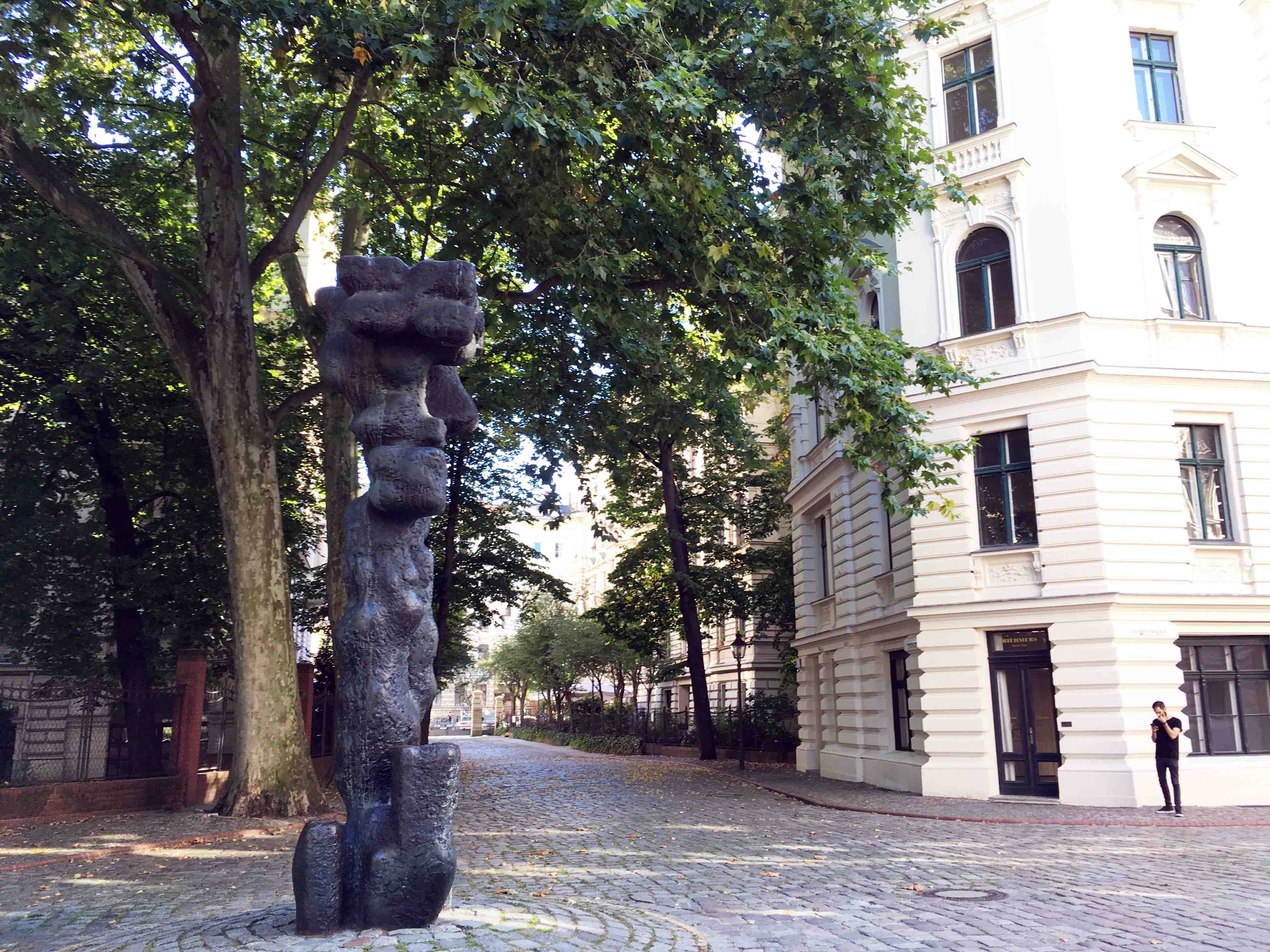 A view of the beautiful garden courtyard in the Riehmers Hofgarten (cc) Antonella Radicchi.