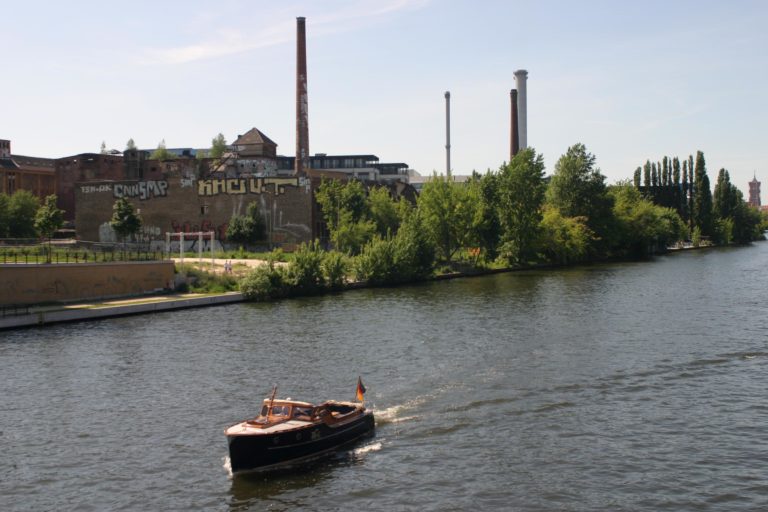 As a follow up on the article “Berlino Swim City?” [“Is Berlin a Swim City?]  written by Antonella and published in the Scientific Journal “EcoWebTown. Journal of Sustainable Design”, the September newsletter hosts a commentary written by the landscape engineer Christian Hajer, who expands on the planning and design of Berlin as a Water City.

The invention of the water city

If you travel from the city center by boat on the Spree in a southeasterly direction to the outskirts of the city, the upper course of the Spree soon opens up behind the Mühlendammschleuse as a rich urban water landscape, lined with residential areas and parks, islands, former industrial and traffic facilities, near-natural forests, port dumps, abandoned military border patrol facilities, allotment gardens, and extensive meadowlands on the outskirts of the city. The river Spree reaches its widest extension in the inner city in the area of the Elsenbrücke bridge and the adjoining Stralau peninsula, in the area of the Rummelsburg Bay. The reunification of Germany offered the opportunity to preserve and develop these unique landscape qualities of the water landscape.  The vision of Berlin Water City  was born. It was based on the analysis that the former industrial city lived too much with its back to the water, did not open itself up to the river and had no real relationship to it. Expert reports on the development of Berlin as a Water City were commissioned, and Water City conferences with guests from Hamburg,Venice, Amsterdam and Copenhagen took place. Early expert reports and outline plans reflect the outcome of this discussion – the idea of Berlin as a Water City, whose perspective quickly narrowed down to numerous housing projects whose realization was considered to be urgent. Various property owners such as the Federal Government, the City Council of Berlin, districts and private owners shaped the location with their very own ideas. They soon concentrated on individual projects such as the modernization of the Osthafen for freight traffic, the development of office and service centers in the area of the Postbahnhof, the development of multi-story apartments around the Strahlau peninsula, and the closure of the A100 freeway ring road over the Elsenbrücke bridge. An important step was the determination of the City Council of Berlin to create a two-sided continuous riverside path along the Spree, which was to be developed step by step.

Pioneer users as temporary users of  the banks of the Spree

On many plots along the waterfront, leases have been signed for temporary uses such as youth projects, clubs, bars and associations to revitalize the areas. Formerly inaccessible and locked bank properties could thus be used for the first time. A large part of these initiatives were also financially supported by the city. They were labelled „Urban Pioneers“ and were thus also part of the early location marketing. In the summer of 2007, crossing again the Spree River by boat, hundreds of young people could be seen playing and enjoying themselves on the riverbank or dangling their legs, sitting on the bank wall with refreshments in their hands. Hardly any urban space appeared more frequently as a film location for product advertising and Berlin city marketing to deliver the “Berlin feeling”. From about 2010 onwards, this urban space and its activities represented the national and international perception of the city like no other.The opening of many previously inaccessible riverbank areas revitalized the Spree River. The approach is reminiscent of the Place Branding at Tempelhofer Feld. In peripheral areas of the formerly closed airfield, areas were rented for pioneer uses, which were soon to be sold and developed for residential and commercial purposes. However, the implementation of the development plans was stopped here by a referendum in 2014. In the case of the Spree riverbank, too, criticism and resistance from users and residents against the further development plans of the district and investors arose. This culminated in a referendum in 2008, in which 86 percent voted in favor of the proposal of the “Sink Mediaspree” initiative. The demand was to keep a distance of 50 meters from the shore for new construction projects and to limit the construction height to 22 meters.

Swimming and bathing in the river is not possible

There are 40 bathing places in the Berlin urban area, such as the rivers of Dahme, Havel and the city lakes, but not a single one within the city-centre ‘s S-Bahn ring. There, the most obvious thing remained taboo: physical contact with water – swimming and bathing in the river. Physical contact with the element water remained forbidden due to water pollution. One reaction to this was the Badeschiff, a bathing ship that was put into operation in 2004 and enjoyed great popularity. However, in its time the Badeschiff was not understood as a permanent substitute solution, but rather as a kind of transitional solution until bathing in the Spree is possible, once the discharge of waste water from the overflows of the combined sewer system is stopped. This was to be achieved by the Spree 2011 project, which, however, was no longer financed by the city after partial realization of the first test tanks. Over the years, leisure time behavior and demands on urban greenery and landscape-bound sports and recreational activities are experiencing great growth as well as the interest in near-natural but usable open spaces in the city. The increasing heating of the densely built-up inner city areas in the summer months as a result of climate change makes a stay by the water a valuable asset. Other cities are showing the way. In Zurich and Basel, but also in Frankfurt am Main and Munich, urban society is now finding cooling in the river. In Munich, moreover, even a large section of the formerly canalized Isar River has been renaturalized at considerable expense. The project Flussbad in the center of Berlin at Kupfergraben is based on this idea and pursues the goal of establishing a city canal as a central place for public bathing and swimming. Water purification and upgrading of the canal for safe residence are becoming increasingly expensive. What began and was advertised as a sustainable, low-tech engineering-biological project has now developed into a large-scale project with cost risks that are difficult to calculate. The Kupfergraben is a concreted side canal of the Spree with 3-4 meter high bank walls. One advertises with the swim course in the canal, but the project lacks open spaces to stay in the immediate vicinity. Berlin has so far failed to stop the discharge of overflows from the combined sewer system. This would be the basis for the creation of a high-quality urban superspace shaped by water, which would bring the cityscape, water and people together. A water-dominated urban landscape of a new type, characterized by the presence of people on and in the water, a wet counterpart to Tempelhofer Feld. And if the water were clean, one could bathe anywhere in the city. On the Kreuzberg side of the Spree riverbank, there are still a number of possibilities for correction and creative design. There are still areas there that have not yet been developed. There one could also imagine that people could meet and swim there in the future.”

— Mr. Hajer is a town planner and landscaper. He works as expert guide and speaker in the field of urban development in Berlin. Mr. Hajer’s website: www.berlin-info.com