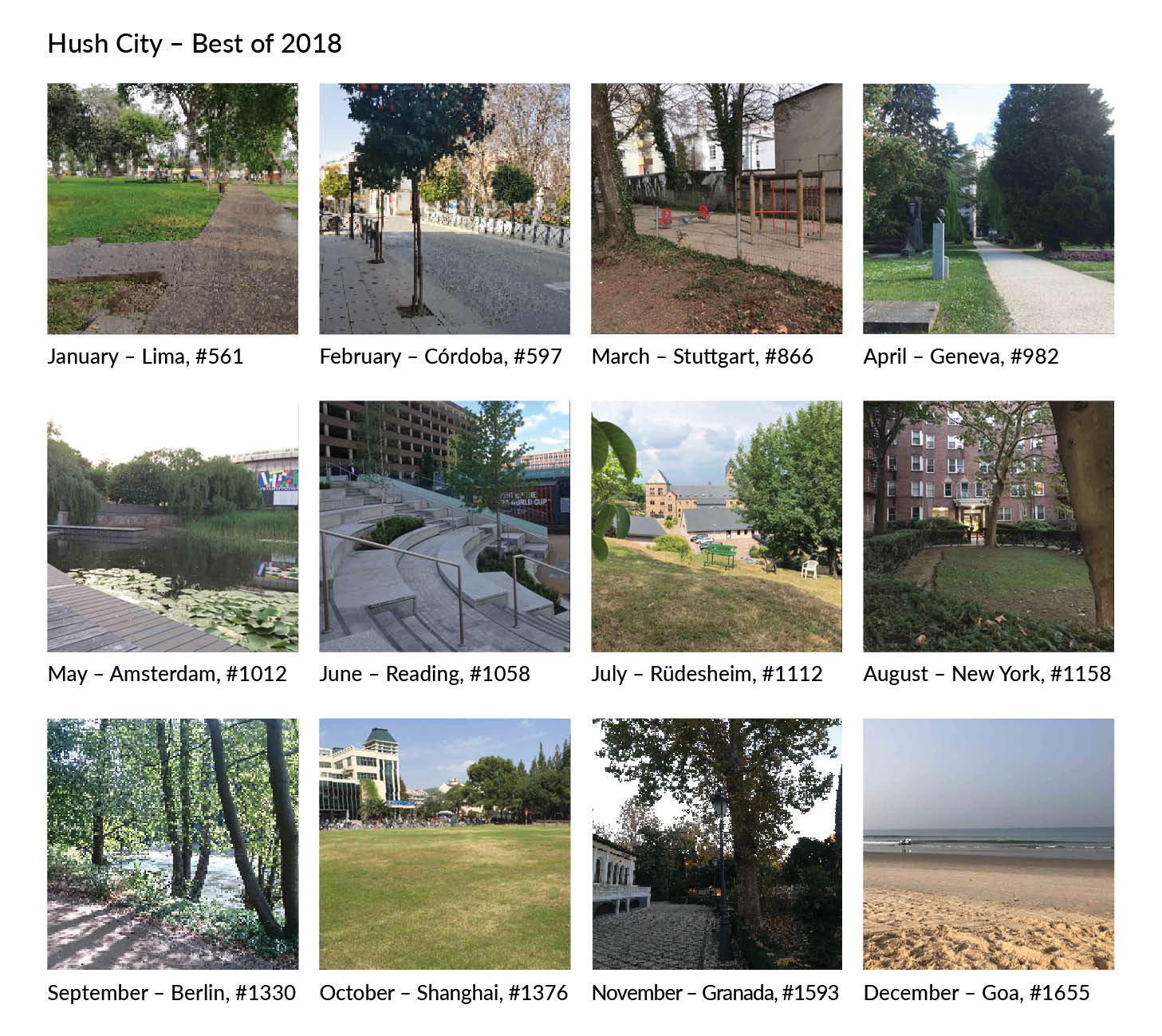 So, here we are approaching the end of the year! 2018 was the beginning of a new journey, which brought us to conduct in-depth research, live fabulous experiences, make interesting encounters, and have inspiring discussions. We have also learnt many lessons. For example, reflect on failures is as much important as celebrate achievements is. So do we!

From Beyond the Noise to Hush City Mobile Lab

After the conclusion of the “Beyond the Noise” research project, we set up the “Hush City Mobile Lab” at the Technical University of Berlin, supported by an HEAD-Genuit Foundation research grant. Key to the project is the application and dissemination of the open source soundscapes approach to everyday quiet areas. Read more here.

On April 17th 2018, Antonella led a soundwalk with a group of female students of the Rütlischule in the Reuterkiez for the International Noise Awareness Day. This soundwalk was part of the “Soundwalking in the kiez!” Program, initiated last year within the framework of the “Beyond the Noise” project and run in collaboration with the Stadtteilbüro Reuterkiez to promote and diffuse the soundscape culture in the Reuterkiez. Did you miss it? A recap here.

On May 16th 2018, Antonella led a soundwalk in Altstadt Köpenick, Berlin. The soundwalk was organized in collaboration with the district of Treptow-Köpenick and the Senate Department for the Environment, Transport and Climate Protection, within the framework of the public participation campaign “Berlin wird leiser”, preparatory to the next Berlin Noise Action Plan. The soundwalk was a successful experience, which confirmed the interest and the potential of citizens in playing an active role in soundscape evaluation and planning. More on the soundwalk and its results can be found here.

In June we kicked off the Everyday Quiet Areas Map, which since then has been online and open access here. The map displays the everyday quiet areas crowdsourced worldwide with the Hush City app. By offering open access to the Everyday Quiet Areas Map we hope to increase awareness on the importance of having, curating and protecting everyday quiet areas in our cities. Read more here and give your feedback!

On July 18th 2018, we celebrated the World Listening Day 2018 with two soundwalks conducted in the Reuterkiez, Berlin. The soundwalks were led by Antonella and organized by Dominik and Stefanie of the Stadtteilbüro Reuterkiez. Interestingly, besides traffic noise, nightlife was reported as a novel, albeit dramatic, noise source in the neighborhood. We are happy to inform you that the District of Neukölln had just approved a noise impact study to deepen the issue in the area, starting from 2019. More on the soundwalk and the World Listening Day here.

In August, we released a new free version of the Hush City app with tremendous new features. For example, we implemented new languages and now the app is available in English, German, Spanish and Italian. And because your contribution is fundamental, we added the “Hush City Ambassador” feature! When you submit a survey you will be nominated “Hush City Ambassador” of the city where you collected the survey. Read more on the new features here. New to the Hush City app? Give it a try here!

Soundwalk in the Pankstrasse area, Berlin

On September 11th 2018, Antonella led a soundwalk in the Pankstrasse area, Berlin. The soundwalk was organized by the Senate Department for the Environment, Transport and Climate Protection, in collaboration with the district Mitte of Berlin and the Quartiersmanagment Pankstraße within the framework of the public participation campaign held in preparation of the next Berlin Noise Action Plan “Berlin wird leiser”. Curious of what the participants reported? Read here the results.

In several European cities – across Spain, France and the UK, for example – walkability, bike-friendly design and free public transport are measures rising on the top of the planning agenda. And our newsletter dedicated to the car-free cities movement was one of our most popular ones in 2018! Did you miss it? Read it here.

On November 27th 2018, Antonella led a soundwalk in the historical center of Madrid! The soundwalk was organized by Professor Vida Manzano, within the context of the International Conference of the Environment: CONAMA 2018. During the soundwalk, the Hush City app was used to evaluate the 8 listening points along the route. Seventeen participants joined the soundwalk and overall they collected 61 datasets: 61 recordings, 61 noise measurements, 61 pictures & 1220 entries. Do you know that you can review the Madrid quiet areas, crowdsourced during the soundwalk, on the Hush City website? See for example, area #1586 at Puerta del Sol.

We would like to conclude this year by thanking you very much for your fantastic participation and kind attention. We will get back in touch early in the new year with great news for the 2019! 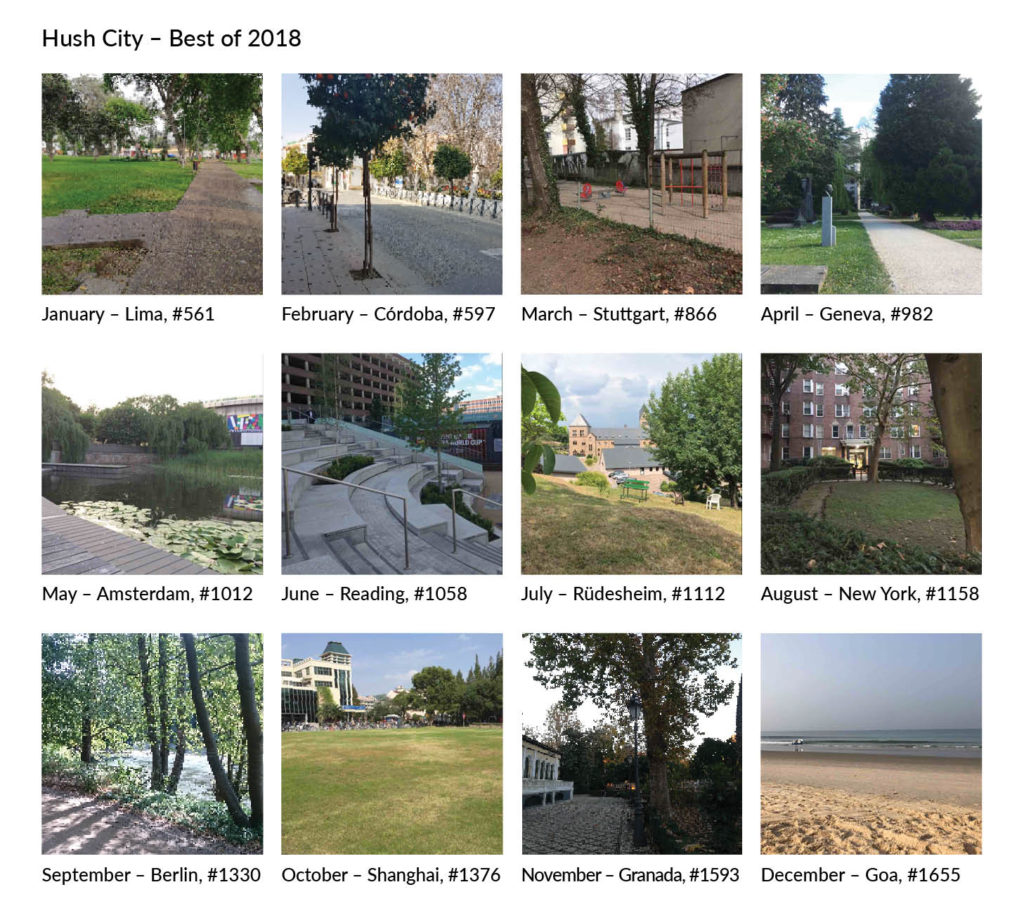