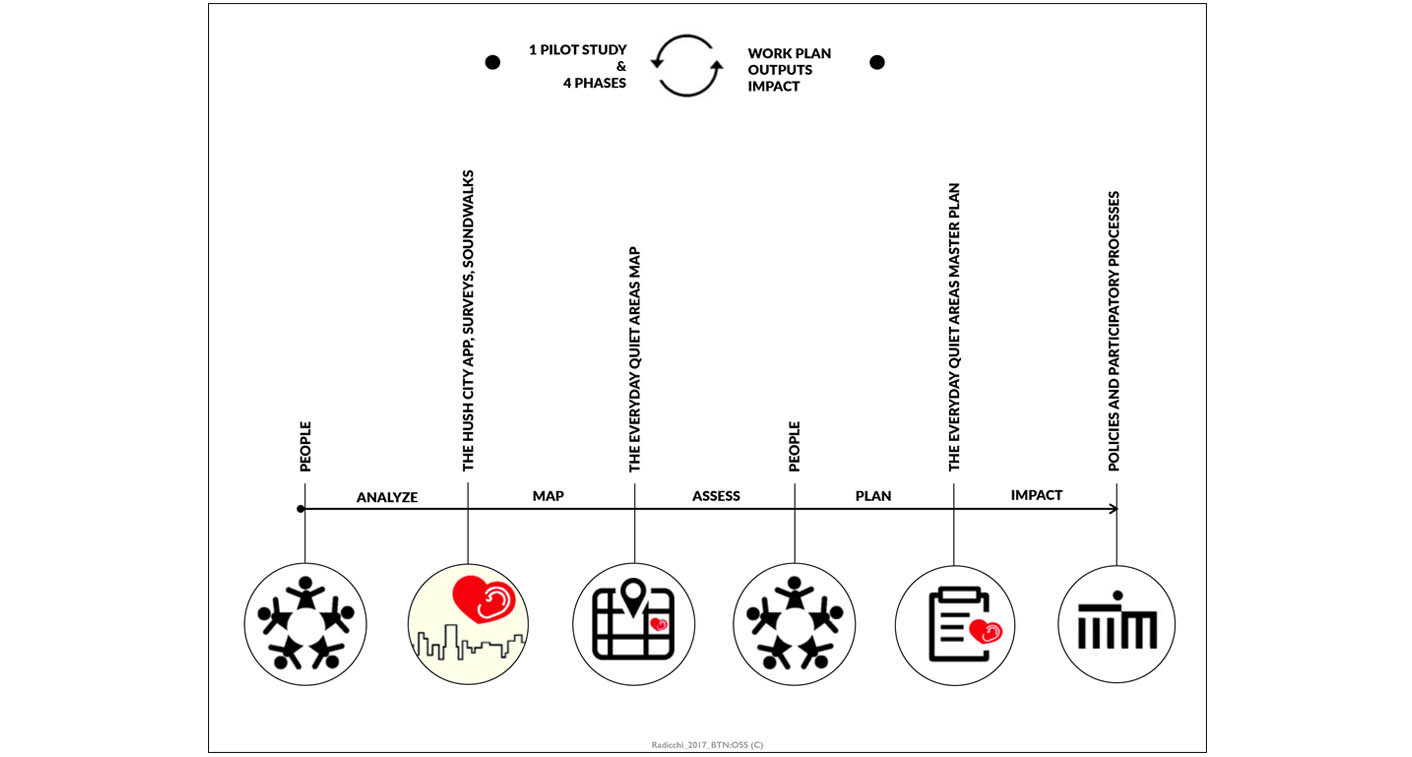 “The soundscape is a huge musical composition, unfolding around us ceaselessly [where] we are simultaneously its audience, its performers and its composers.” (Schafer, 1977)

Every year 125 million Europeans are affected by noise pollution from traffic, which affects our health, quality of life and well-being. Noise pollution, indeed, represents a hazard to our physical and psychological health, it results in huge costs to our society and it has dramatic impact on biodiversity. To take action against noise pollution is therefore imperative.
In 2002 the Environmental Noise Directive was released to tackle this challenge; furthermore the directive identifies the protection of quiet areas as a valid measure to reduce noise pollution. However, how to properly identify quiet areas is still an open question at the European policy level, as indicated by the European Environment Agency in 2014, who invited scholars to pursue in-depth research in this field by experimenting with mixed approaches.
Through the development of the Beyond the Noise: Open Source Soundscapes project, a novel, participatory methodology to identify, evaluate and plan “everyday quiet areas” in cities was successfully validated. This methodology combines the soundscape approach, citizen science and the implementation of a novel mobile app: the Hush City app.
In the pilot study, conducted in Berlin, methods like semi-structured interviews, group soundwalks and the use of the Hush City app were applied to allow the participants to identify and evaluate “everyday quiet areas” on the neighborhood scale. The results were collected to compile the Reuterkiez Everyday Quiet Areas Map, which was used as a basis to define planning guidelines for the protection of these areas.
Beyond the Berlin pilot study, the Hush City app has been applied in other cities worldwide, confirming the interest of the general public, academic circles and stakeholders on the issue of urban quiet areas and the replicability of the methodology. Positive impact is expected on different fields such as science, politcs, environment, economy and public health.

The research leading to these results has received funding from the People Programme (Marie Curie Actions) of the European Union’s Seventh Framework Programme (FP7/2007-2013) under REA grant agreement no. 600209 (TU Berlin – IPODI).
The project received the no-profit institutional support of the Berlin Senate and it will be developed in accordance with the Berlin Senate, Senate Department for the Environment, Transport and Climate Protection.